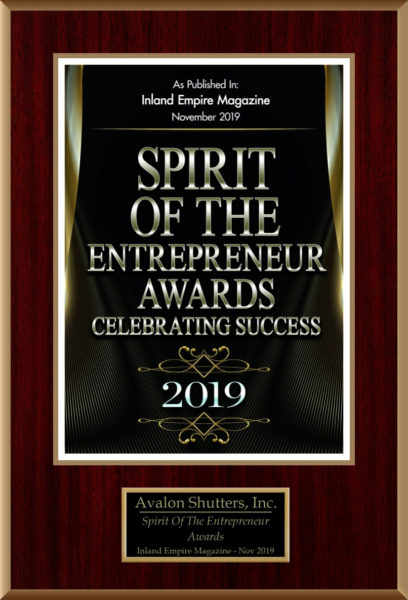 Avalon Shutters was one of 33 companies honored from a field of 228 nominees for this distinctive award presented by the Inland Empire Center for Entrepreneurship (IECE) and the Jack H. Brown College of Business & Public Administration at California State University San Bernardino.

In its seventeenth year, the Spirit of the Entrepreneur Awards recognize that “Innovation is Not Enough,” and that creating a successful business enterprise includes equal measures of passion, drive, commitment, determination and risk taking. The award captures the dream-to-reality story behind Avalon Shutters, as friends and master carpenters Bob Marcynyszyn and Doug Serbin had their humble beginning in a small two-car garage and grew the company as a way to better serve customers with high-quality, custom wood shutters. Today, more than thirty years later, Avalon Shutters operates from their large manufacturing facility in Perris, California and maintains those core principles of exemplary quality and customer service.

Congratulations to Bob, Doug and the entire Avalon Shutters team for their hard work, dedication and commitment to exceeding their customers’ expectations.

Watch Bob and Doug’s acceptance speech in the video above, and learn more about what makes Avalon Shutters so special.

Ready to transform your home?

Start with a free in-home design consultation with one of our experts.

Here's what our customers say about us!  Read more reviews